To Pee or Not to Pee: Adventures in Potty Training 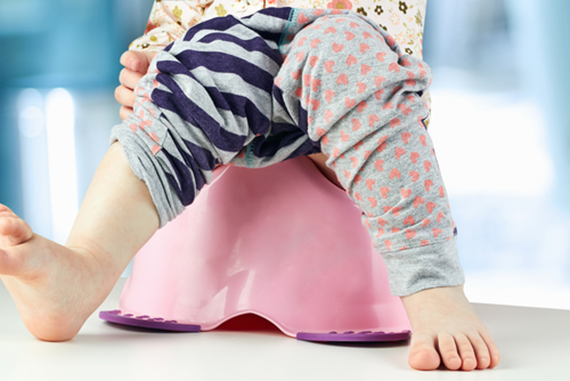 To pee or not to pee; that is the question. The answer is yes on the floor, not in the potty and I don’t give a crap about your sticker chart.

Oh potty training. My old nemesis has once again reared his ugly head and I am powerless in a battle I cannot win. My laundry is piling up, my floors are wet with both urine and tears and if it doesn’t end soon I may have to take out some stock in the LCBO (read: liquor store, for everyone outside Ontario).

Whenever I listen to the mom stories of, “I trained my perfect child in three days,” I always fight the urge to yell, “Liar!” while simultaneously feeling a stress eye twitch from the last round of ‘let’s see how many times you can poop in the house before I break out a Pampers’.

The issue with my daughters is not that they are not physically ready to potty train. I always waited for the signs before I attempted these acts of insanity: dry diapers after naps, taking off their diaper, and or showing an interest in the potty.

With my first daughter there was a stint of about a week where she was peeing in the potty and loving it but then she realized I was enjoying this freedom a little too much. She then shut down for the next six months. After begging, bribing and many tears shed (mine) she began to happily train because her best friend was and it was the ‘cool’ thing to do.

I thought my second daughter might be easier since she had an older sister to imitate but instead it was such a catastrophe she shut me down for any future training. Hannah, my fiercely independent middle daughter got a horrible rash on her bottom that I could not heal. This meant that the moment she pooped she would not only rip off her diaper but then smear her turds all over whatever room she happened to be ‘napping’ in. Finally summer arrived and I felt ready for the ‘let her be naked with a potty in the backyard’ method thinking my daughter would have a few accidents and then ‘get it.’

Wrong. How I underestimated my little angel.

With my first daughter there were many pee accidents, mostly on my couch but I understood. She got distracted, it came upon her quickly. These accidents, although annoying, were fairly minor. Hannah, on the other hand, pooped everywhere and anywhere. In the backyard I found myself cleaning out the plastic playhouse, the deck, the lawn. My poor basement was a hot spot for feces.

It was a very dark time.

It’s important to note that a full six months before training began Hannah excused herself from the dinner table one night, went to the bathroom, got on the toilet and pooped. My kids control issues have nothing to do with their bladder and everything to do with how crazy it makes their mom.

So now I find myself here again. In a world of paying more for my kid’s underwear than my own because their obsession with Dora the Explorer might fuel a need to evacuate their bowels somewhere other than their pants. My youngest daughter senses my fear and frustration as we once again attempt this process because it’s summer and I’m hoping to save myself some unnecessary laundry.

I’ve already put the potty chart up on the wall, bought the kinder eggs and talked up how ‘awesome’ the potty is.

Now I find myself in a standoff between waiting for her to go on the potty and keeping her naked bum off my new couch. I’m constantly on edge trying to get her to not run into the kitchen and pee on the floor and we aren’t even in the scary “OK let’s see what happens if I take you in public” territory.

So I’m quoting Shakespeare and my eye is twitching. My floors are being cleaned on the regular but diapers may soon be a distant memory. So I’m drinking some wine for courage and forging ahead. Promising my two year old the world in exchange for a little poop in a plastic toilet; and blogging it for all to read.

Are you in the thick of potty training adventures too? Share your stories and tips in the comments!