Motherhood Is Not for Wimps

Five years in, my kid can scream, “I hate you,” across a silent library during family fun hour and I don’t even bat an eye. My skin has grown thick; my tears will wait for the still moments before sleep.

The moment a woman finds out she is pregnant for the first time, whether she is filled with joy or not, is arguably one of the most frightening moments of her life. If she gets over the fact that she will have a human being growing inside of her for the next 40 weeks of her life, she still has to face the fact that one way or another, she is expected to get that baby out.

The introduction into motherhood comes in many forms. For some it’s the hot nausea that accompanies that little bean, camping out and staying for days, weeks or months at a time. If only it were as simple as avoiding food altogether, but the sickness that accompanies these miracles is actually worse on an empty stomach.

For others, the pregnancy becomes real the first time you hear the heartbeat. Unfortunately, this miracle comes at the expense of your dignity, the first of many encounters complete strangers will have with your vagina. Any woman who was lucky enough to discover her pregnancy early on has experienced what is called a ‘dating ultrasound’. In early pregnancy this event is done vaginally with what is, for lack of a better description, a big medical phallus. And if you are lucky enough to have a male tech, you get an audience. It’s a great intro into what turns out to be the better part of a year filled with other people’s hands inside your vagina. By the time I gave birth for the first time, I had half my family in for ‘the big show’ complete with an up-close home video, which even I cannot bring myself to watch again.

After the birth, my mom uploaded an album of photos on Facebook for all of our nearest, dearest and random acquaintances to creep. What I didn’t discover until two weeks later was this album included, not only what was arguably the worst photo of me in the world (post-birth sweaty double chin grossness), but also a close-up photo of my 24 hour postpartum breast during my first feeding session. My only option was to ask her nicely to remove the photo and force myself to bury what was left of my self-respect. There is nothing like your mom exposing your breasts to the Facebook universe to cause you to toughen up.

Babies don’t care to be easy on you either. I gave birth to my second just before midnight and by 2 a.m. the midwife had packed up, grandparents had left and the room was still. There was nothing I wanted more in that moment than to fall into a sleep-like coma for the next 8 to 12 hours. Yet my little newborn was wide awake and wanted nothing more than to party all night. She also wanted to co-sleep (a concept I would have never even considered until I was up 36 hours straight), be worn constantly and had breathing issues that would make even the most seasoned parent rush to the E.R. I’m not alone in my struggles. I know mothers who have slept sitting up on their couches for weeks or months to accommodate a fussy sleeper. You don’t know crazy until you have been sleep deprived for a long period. When you are in the thick of it, you don’t even recognize you are tired because it has been so long since you were rested. And all the while you are in charge of keeping a little person alive, second guessing your choices constantly and comparing yourself to the ‘super moms’ whose babies slept through the night at six weeks.

But these trials are nothing compared to those experienced by parents whose children are not born healthy. I have a close friend who uprooted her entire family, spent the better part of her pregnancy in the hospital and nearly died to give birth to her son. Another friend’s son nearly died shortly after birth and has been in and out of Sick Kids’ for much of his young life.

Others fight the battle that cannot be won; heartbeats are lost, babies are born sleeping. This is a toughness I could not even fathom had it not occurred in my own family. When many would give into their grief and let it consume them, my cousin and her husband chose to honour their baby and not give up their fight to be a family. Two beautiful rainbow babies later, they regularly visit their first born’s final resting place, send balloons to heaven and are lucky enough to have a few special photos to remember their little guy.

I’m a tough mother, but I’m nothing compared to my cousin. Her experience breaks my heart, but it helped shape our whole family. My own mother and step-father now volunteer for Now I Lay Me Down to Sleep and will photograph critically ill children and babies born still. They are with these parents in their darkest hours giving them the only thing they have to give.

Motherhood is tough, but losing your chance at it is even tougher. October is Pregnancy and Infant Loss Awareness Month. This is a day to remember these beautiful babies, to raise awareness of the impact of these losses and provide public support to these parents.

You can show your support by attending a live event, where many Canadian attractions will be lit up pink and blue such as the C.N. Tower and Niagara Falls. If social media is more your speed, a campaign has been circulating on Facebook and Twitter to #getpinkandblue to change your profile picture and show your support. 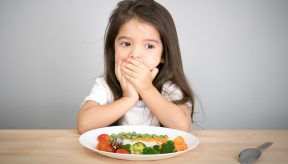 Starting solids with your baby is exciting but find it overwhelming to sort out how and when to introduce food ...

Self-Care: Mindfulness for the Holidays

The hustle and bustle of December can be intense. I know I'm just trying to hold everything together long enoug...